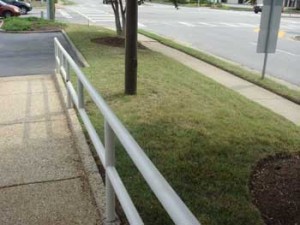 A commercial handrail is a tempting target for a skateboarder

Skateboarding is a popular sport and kids are going to find places to hone their skills. Unfortunately many of the places they choose to practice the sport are not appropriate or safe, such as your commercial handrails.

According to a report compiled by the American Association of Neurological Surgeons, skateboarding ranks eight, overall, with 23,114 head injuries in 2009. However for children ages 14 and younger the sport of skateboarding rises to 5th place for the cause of a head injury and was the culprit in 14,782 head injuries within this age group.

Additionally, according to the 2011 USA Skateboarding Fatality Report conducted by Skaters for Public Skateparks, Inc. (SPS) there were 43 reported deaths of skateboarders in the United States in 2011 including 11 in California, four in Texas and three in Virginia. If this isn’t alarming enough, the study showed that only one skateboarder was killed at a skateboard park and the other 40 were in public streets including 30 involving vehicles. You can read more details about skateboarding injuries and fatalities at Skaters for Public Skateparks, which is an advocacy for building safe skateparks for this popular sport. 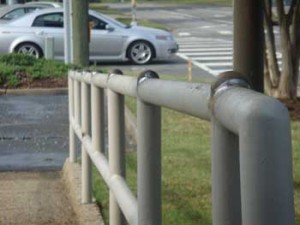 As a business owner you can’t be policing your commercial handrails 24/7 and if someone gets hurt on your property, especially if it is serious, lawyers get involved. Besides no one wants to see a kid get hurt or worse yet killed because they were trying a trick they weren’t ready to attempt. Unfortunately, a smooth, long handrail is very tempting for a child determined to ride rails. Skateboarders riding this Tidewater Virginia commercial handrail was recently a big issue for this local establishment so they called Moonlight Welding LLC for a solution. Floyd modified the commercial handrails to include anti-skateboarding knobs and this welding modification was instrumental in discouraging skateboarders from using this businesses property for handrail skating. All these handrails need now is a coat of paint.